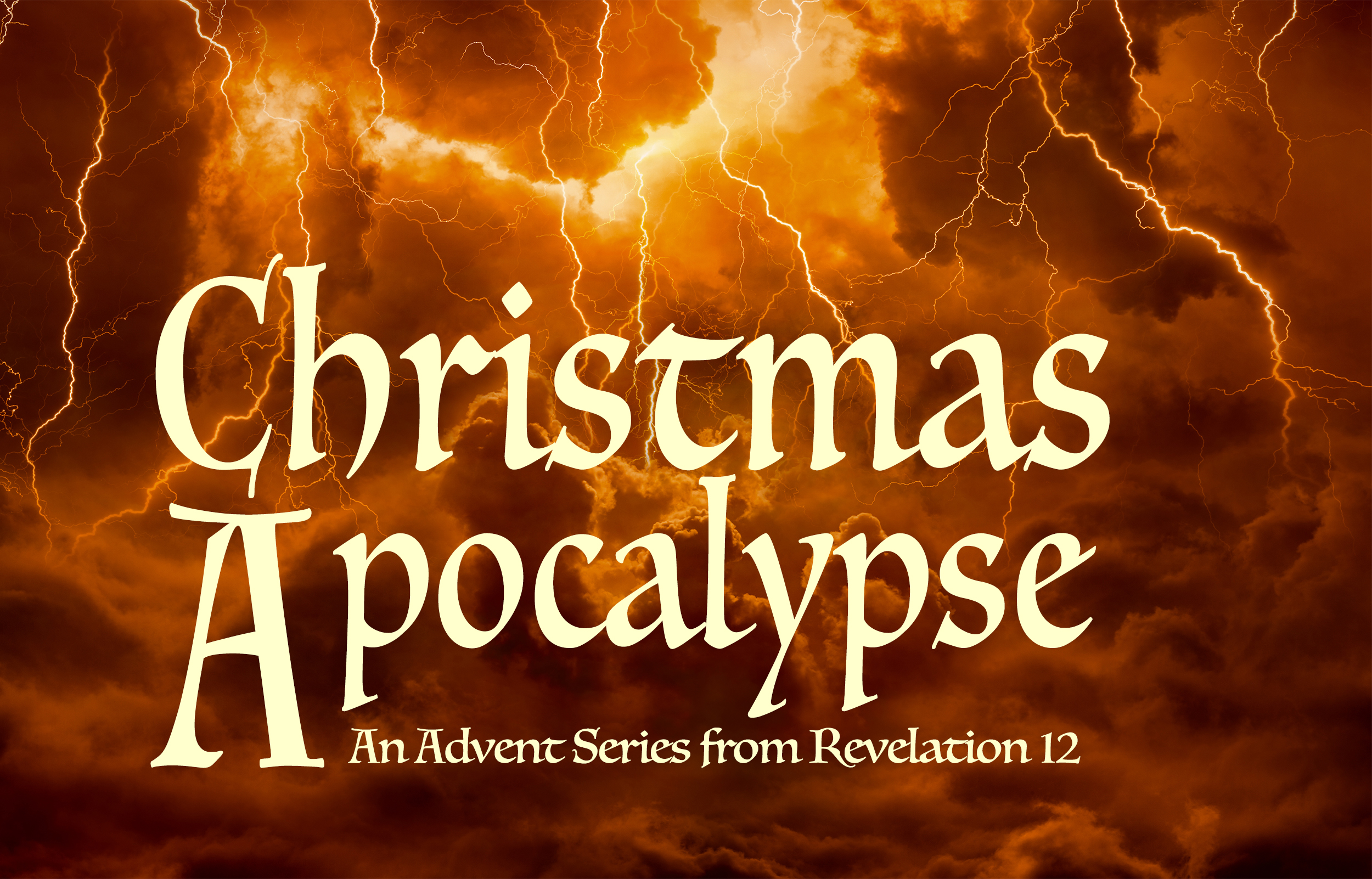 We are studying Revelation 12 for Advent this year. That chapter sits in the middle of the Bible’s most difficult book and that requires some explanation.

I am interpreting Revelation 12 as a cosmic nativity story. That was a safe meaning for last week’s passage (12:1-6), but it will get more complicated in the following weeks. I want you to know that the interpretation I will present is NOT the only way to interpret the passage. You have freedom to take a different view and, because John is writing top shelf prophecy, there are likely several meanings to this story anyway.

But as we go through it we need to remember that there is a difference between preaching and teaching, and the difference is “worship.” If I would have preached from Revelation a decade ago, I would have made sure to untangle all the different views. That has changed. I don’t care a whit if you know the views on Revelation 12. I don’t think that is the my task in preaching. My plan this month will be to take one interpretive line and stay after it until we all see Christ. I will probably skip important concepts in this chapter, even ones I agree with. I have no intention of covering all the bases or chasing all the imagery, I only plan to declare Christ (within thirty minutes).

So, why is this book so hotly debated?

The current iteration of cantankerousness about the Book of Revelation started in the early 1900’s. There have always been a variety of views about the end times (and Revelation), but those lines weren’t always battle lines. I think the history of the debate offers more insight than the views themselves.

In the early 1900’s, liberalism gained more and more influence in the American church. One of the fruits of liberalism was the undermining of Scriptural authority. As part of this assault, liberals started to emphasize symbolism and “spiritual truths” as they studied their Bibles. This got them off the hook of having to believe some of the more supernatural parts of Scripture: the Virgin Birth, miracles, the physical resurrection, and return of Christ. Liberals could now say they believed in those things, but only as symbols and spiritual truths. This was far from the historic understanding of these events and a massive schism erupted in the church.

As the lines were being drawn, liberals weren’t the only ones to abandon historic interpretations! Religious conservatives responded by demythologizing the Bible and emphasized certainty over mystery. They became violently suspicious of any reading of Scripture that depended on a symbolic or spiritual interpretation and they touted a literal reading whenever possible. The Bible was quickly reduced to a manual of religion with all the artistry of a scientific textbook. The conservatives made the critical mistake of assuming that something that was spiritual was less real than something that was literal. They lost sight of the literary symbols that tied the Old and New Testaments together, those bigger-than-proof-text-concepts that form the foundation of our hope.

As these groups battled, an easy place to fight was Revelation. The liberals gravitated to those readings that emphasized the symbolism while conservatives created their flowcharts. Regardless of who was right, the impulses were problematic. The conservative church made some poor decisions in the heat of battle that alienated its own members, most notably on this issue of Revelation. The most cryptic book in the Bible is now the litmus test for certainty. The deepest mysteries in the Bible are now advertised as forgone conclusions.

My mentor may be the best preacher and Christian I know, but he cannot be ordained in the evangelical denomination where pastors because he doesn’t hold to a pre-millennial view of the end times. I’ve heard of churches almost splitting when a pastor preached on Matthew 24 and people have left CTK because of my personal view on this stuff. The fight is real and necessary, Scripture contains the very words of life for us, but the battleground is misplaced if we look for it here. Views on Revelation have become shorthand, and shorthand is dangerous in matters of religion.

Good Bible reading means listening to the text, making note of the genre, and applying it with humility. That will be our goal this month. As we approach Revelation 12, let us embrace the spiritual mystery, which is dripping with symbolism, as we set our hope on the literal Christ. And let’s do so with the liberty and charity of those whose litmus test is the life and death of Jesus Christ.